Bringing Home a New Puppy: How to Prevent Your Dogs from Feeling Jealous

Trying to introduce a new puppy into a household with dogs who have already established their order and routine can be tough. Long-time pets may resist a new canine in their territory, especially once they realize they’ll have to share your affection. While jealousy is a common feeling for dogs to experience at first, it’s important to do what you can to curb this behavior before it leads to serious aggression. Here are a few ways to help you break the ice with new pets and develop a harmonious environment where everyone can get along.

Know the Signs of Jealousy

The first thing you’re going to want to do, even before you bring your new pup home, is know what the signs of jealousy are. The more you know what to expect, the better you’ll be at dealing with difficult situations when they arrive. Here are a few ways to tell if your dogs have been taken over by the green-eyed monster:

It’s important to reinforce the idea that you’re the leader of the pack. If your dogs start acting up, tell them “no” in a firm voice. Insist that they model the desired behavior, and be quick to reward them when they cooperate. This will quickly demonstrate that their jealous antics won’t be tolerated.

Introduce Your New Puppy in a Neutral Territory 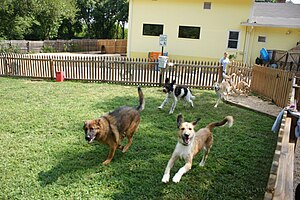 Because dogs are such territorial creatures, you’ll increase the chances of them warming up to each other if you introduce them in neutral territory (such as an off-leash dog park). This will allow them to greet the new addition without feeling like their space is being invaded. After they’ve associated with each other away from home, take another baby step by letting them interact in your yard. If you have a gate or wireless dog fence, this works better as it allows them to connect with each other freely without having to be tied up or restricted by a leash.

Use Praise to Reduce Tension

When you finally bring your pack inside the house, be prepared for things to feel a little tense at first. It’s important to praise your dogs while you’re giving your puppy attention; this lets them know that they have not been forgotten or replaced. Rotate back and forth between loving on your old four-legged friends and your new one in order to distribute the attention equally, or test the waters and see how playing with them all at the same time turns out.

Keep Up With the Old Routine

A big cause of jealousy in dogs is a major switch-up in an established routine. Just like humans, dogs are resistant to change, so make sure you’re doing as much as you can to keep up with old habits. Go on the same morning walk, play the same games, and stick to the same feeding schedule. By incorporating the newbie into the fun activities, acceptance and bonding from the seniors will strengthen.  You’ll also want to be consistent with the rules; it can be tempting to make an exception to the “no dogs on the bed” rule for your small and adorable puppy, but doing so will increase jealousy immensely.

While it is important to generally keep things equal around the house, you might have to make an exception when it comes to feeding time. Food-related issues are a big cause of aggression, and as far as meals go, it’s best to let nature take its course. Dogs instinctively have a pecking order, so try and adhere to their rank when deciding who to feed first. If the alpha male (or female) still tries to take over the new pup’s food, it might be easier to feed them in separate places.

It can be frustrating dealing with jealous dogs, but try to see it from their perspective; they’ve worked long and hard to earn your affection. It could take some time before your old friends fully accept the new member of the pack but as long as you’re taking the proper steps to reduce tension and maintain old habits, it shouldn’t be too long before you all become one happy family.

Ron Rutherford is a freelance writer who enjoys helping others learn more about their canine friends. He currently writes about dog behavior and training tips.